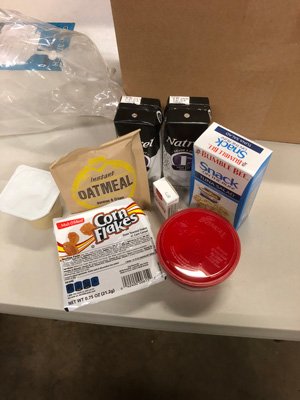 It’s Friday afternoon at Johnson Park Elementary School in Princeton; school is out for the weekend and students are packing up their backpacks.
Nine-year-old Tia collects her folders, markers and her favorite book in preparation for the weekend ahead. Before she heads home, she makes sure the bag of food has been placed in her backpack. This food will provide her and her family meals throughout the weekend until she returns to school on Monday.

Thanks to SHUPP, Tia and many other students like her will not have to worry about where their next meal is coming from.

That worry is one all too familiar for thousands of families around the state of New Jersey.

When school is out and children aren’t able to utilize the school meal program, some families find it difficult to make ends meet.  With over 500 children in Princeton living in food insecurity hunger is a prevalent and daunting problem (Feeding America, 2012).
The SHUPP Project has joined the fight for these students–the fight against child hunger.

As a growing network of weekend food programs operating in multiple schools, The SHUPP Project partners with Mercer Street Friends and schools to give food to those in need. While the SHUPP organization provides the funding and the school provides the volunteers, Mercer Street Friends provides operational expertise and logistical management for the program so that the community partners can focus on maintaining and building their relationship with the school.

“We’re doing the logistics. They [community partners] just want to have the relationship with the school and distribute food,” says Shannon Mason, PhD, the executive director of the Mercer Street Friends. Though MSF provides the logistical management, school personnel play a critical role in getting these weekend meals to kids in need. Volunteers can sign up for food packing shifts online at www.msf.org

SHUPP began in 2013 when members of the Princeton Human Services Commission learned that recipient students of free and reduced lunches were receiving no food to eat over the weekend. To fill this need, SHUPP was launched to regularly provide a weekend’s supply of food to children in need. Through close partnerships with school administration and MSF, this mission was able to thrive and expand to more students and more schools.

Members of SHUPP requested and received funds from both individuals and institutions including Princeton University and Princeton Theological Seminary among others to fund the program which began in September 2013.

Today SHUPP is currently operating in 6 schools throughout Princeton as well as 4 locations during the summer which is in its first season.
SHUPP’s success illustrates that through education, partnership and empowerment the fight against child hunger is one worth pursuing. They have seen growth in a variety of ways yet all working towards the same goal of providing meals.

The numbers speak for themselves:  SHUPP has distributed over 40,000 supplemental meals in its first two years of operation since the 2013-2014 school year.  And with the addition of summer distribution, the numbers will only grow.

Programs like this are doing much more than just providing a meal, they are bettering a child’s health and well-being, education and future. Research shows that nutrition plays a key role in not only filling the need in their stomachs but increasing positive performance in the classroom.

“Kids who are hungry have difficult time learning, paying attention in class and interacting with their peers or adults in their school,” says Mason.

This past fall, SHUPP hosted a celebrity chef at Community Park School highlighting the importance of economic and healthy meals. The event was quite a success as they were able to create awareness and promote their innovative solution to child hunger. The event served as a launching pad for further conversation and collaboration, whether it be among family, friends, or professional networks.

“They left knowing that there are kids who are hungry. That’s the biggest win. They now have the knowledge and the opportunity to do something about it.”

As SHUPP continues to thrive and make itself known within the hunger-relief sector, Mason doesn’t lose sight of the vast impact a basic meal can provide for a child.

“Food is one of those things that’s unknown during the weekend. Kids shouldn’t have to worry about food. It’s common sense.”